Best Beef Recipes is an Amazon Associate. We receive compensation for purchases made through affiliate links.

Jump to Recipe Jump to Video

My Grilled London Broil it out of this world! It marinates in a divine blend of seasonings and juices until it's so tender and flavorful, your mouth will water just smelling it on the grill.

Grilling London Broil steak is perfect for a special weekday meal or even for entertaining at a cookout. It is budget-friendly and so easy to prepare for a crowd!

After marinating in my delicious combination of flavors, it's ready in less than 20 minutes!

You can use budget-friendly steaks like top round, flank, flap, or skirt steak to make London Broil, and the results are amazing!

What's better than a restaurant-quality steak for a quarter of the price? We love how versatile this easy grilled steak recipe is!

I love to use a simple marinade that really makes the flavors of this London broil steak pop. Here is what you will need to make this delicious steak marinade:

What cut of meat is London Broil?

London Broil actually refers to a method of cooking steak that involves marinating, grilling, and thinly slicing the beef. It's perfect for making the most affordable steaks as tender as more expensive cuts, so it's a great choice for entertaining!

What temperature do you grill a London Broil?

I like to grill my London broil steak at about 400°F. This gives it a delicious sear on the outside but keeps it tender and juicy with the perfect temperature on the inside.

How much London Broil do I need per person?

You will need at least ½ a pound of meat per person. This recipe calls for a 2 to 2½ lb. steak and feeds approximately 4 people.

When marinated and grilled at the perfect temperate of 400°, London Broil will melt in your mouth!

The best part about this London Broil on the grill marinade is that you can swap out ingredients if you have some on hand but not others. Here are some substitution choices:

For a London Broil that is 1 to 1½ inches thick, use the following chart as a reference for cook time:

How to Tenderize London Broil

The best way to tenderize steak for this recipe is to marinate it for enough time!

We whipped up a beautiful marinade to use in this dish, and let it marinate for at least 4 hours ahead of time.

Our recommendation is to let it marinate overnight for perfectly tender beef the next day.

Then, you make a sauce with the marinade. It's delicious!

Let your steak rest for 10 to 15 minutes off of the grill! Then, when slicing, make sure to slice against the grain. This will give you the most tender cut of beef.

We love steak recipes on the grill! Try some of our other favorite Steak Dinner Ideas below:

Did you enjoy this page? Save it on Pinterest for later!

Save the Video Pin

Did you try this recipe? Leave a comment and a rating below to let us know what you think! We love to hear from you! 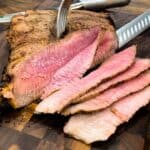 Leave a comment or question - we love to hear from you! Cancel reply